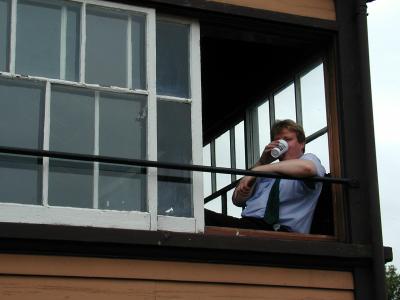 The Bridgnorth signalman reacts with characteristic calm as we book off four track circuits to change the track relays for serviced spares on 14 June.

Since the press date for issue 140 (in early June), we have held our annual S&T working week (from Wed 12th to Wed 19th June) which we reserve for the larger jobs that need more than two or three people. The first task of the week was to provide a new mains power supply to South box, the existing overhead supply having proved unreliable in high winds. Tony Neath, John Smith and myself spent the Wednesday digging in some new troughing for the cable.

After an evening's refreshment at the Bellman's Cross, we were joined on the Thursday by Steve Curtis, John Phillips and Adrian Hassell so we split into three camps: routine maintenance and testing at Highley and Hampton Loade, including location maintenance (eviction of spiders etc.); changing over to the new mains power supply at South and clearing out the cellar of North box ready for a new relay installation and cable frame. Problems with Hampton Loade Up Distant (arm indication) and Down Distant (lamp indication) were rectified and an enormous (but empty) nest was removed from the location cupboard at the Up Distant.

On the Friday we split into three again, Steve Curtis completing routine maintenance (Highley), myself and another changing four track relays with newly serviced spares and routine testing of all track circuits (Bridgnorth) and Denvir Drury, Dave Carr and John Smith working at Bewdley on the new power supply (South) and John Phillips painting the cellar and diverting some telecomms. and power circuits (North).

Most of us were distracted on the Saturday by a 30th birthday party being celebrated on the Venturer set and so little, if any, work got done that day. The Sunday was taken up by our annual S&T luncheon held, as always, on the volunteer-run Venturer set. On the Monday, most of us had a break and all box turns that day were by S&T personnel. On the Tuesday we carried out a major tidying exercise of our storage at Kidderminster.

There has been a larger than usual gap since the last article (Yes, I didn't write one for the last magazine) so a litle more to cover than normal - from July to December.

A lot of the work is taking place 'behind the scenes' as preparation for the major work of rewiring North box - this is the last major piece of electrical work that comes under the heading of major renewals. In issue 135 I reported that the last of the 63 location cupboards had been renewed, bringing them all up to a very high standard and the Bewdley North box rewire will complete renewal/refurbishment of electrical equipment in the signal boxes which included Bridgnorth (recommissioned on 6 August 1978 after a fire); Hampton Loade (Winter 1983/4); Highley (November 1994); Arley (1 September 1995 ); Bewdley South (Spring Bank Holiday 1985, the last occasion on which the Operating Officer in charge brought out the helicopter pad (flat hat)) and Kiddermnster (commissioned 21 November 1987). On the principle of the Forth Bridge, Bridgnorth will probably be the next port of call because the wiring had been installed during the 1970's when the quality of cable construction was going through a low point — the rewiring was enforced due to a fire on New Year's Eve.

The high winds of 27 October 2002 saw mains electrical supplies to Arley, Highey and Hampton Loade cut off for several days. Our standby batteries operated normally to maintain supplies to signalling equipment (but not for the signalman's kettle or his heating at Hampton Loade!) so that no disruption arose directly from the loss of power. Unfortunately the high winds also caused problems on the telegraph pole route between the Up Distant and the Up Home at Arley, which affected the telephone and token circuits between Arley and Highley. Pilotman working was instituted to maintain safe working until the following weekend when the branches which had caused the problem could be removed and some telegraph wires and some exhausted batteries at Arley replaced. This section of pole route is being considered for replacement by a section of new cable.

The Bewdley North box rewire is a major piece of work which has been planned because the wiring has a rather 'unkempt' look now, over 25 years old and standards have moved on since then. Relays all require servicing and the working Distant Signals are to be brought into use. Although there have been no actual failures of the wiring, rewiring is a prudent step, best taken before any problems emerge. A new cable frame (the point where incoming cables are terminated and linked to internal box wiring) has been installed in the cellar of North box - very much behind the scenes, which explains sundry S&T personnel scuttling out from underneath the box from time to time (mostly when the pubs open in the evening or to raid the Bewdley offices or Station staff coffee supplies) without apparently doing anything. An interruption cable has been laid from there to the existing cable terminations - this will allow most of the external cable runs to be renewed, terminated at the new cable frame and then diverted to the existing terminations so that the old cables can be recovered, cable by cable. Only two cables will then need to be diverted as part of the 'intrusive' work - the 27-core cable and the 2-core power cable from location 43 (Down Main Home Signal) — these cables will need to be cut, rejointed and tested. The new relays can then be installed in the cellar without affecting any existing circuits until a certain point in the project where it will become necessary to change over existing circuits. It is not yet clear whether the scale of this work will mean evicting the signalman to a brake van for a few weeks or whether the circuits could be changed over one running line at a time. Throughout it is important to ensure that the documentation is kept up to date religiously so that any fault finding could be carried out successfully at any stage of the work.

Work at Arley to finish installation of electric signal lighting nears completion — at present there are only two signals on the railway that now rely upon paraffin for their illumination. Cabling from the location cupboard at the north end of the up platform to the four nearby signals has been completed, and new lamp cases installed with electrical fittings to the four signals concerned. A small team (John Smith, Tony Neath, Steve Growcot, Derek Jones, David Carr and Chris Hall) have been involved with this work and are currently (January 2003) running a length of 2-core cable for the Up Starter so, by the time you read this in the magazine, all signals at Arley will be electrically lit.

Routine maintenance proceeds uneventfully to ensure the equipment continues to operate reliably (for example battery performance tests under loss of power conditions was carried out between Arley and Bridgnorth this year). Many thanks are due to the 'mid week maintenance crew' (Ray Atkins, Dick Lewis and Steve Bach) as well as those that come along at weekends. 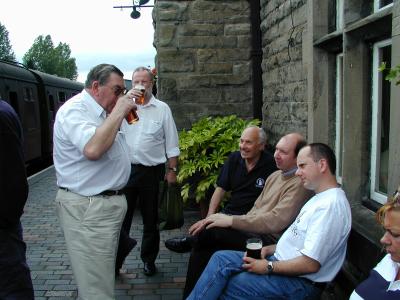 After a very pleasant lunch on the Venturer, some members of the department sample the ale at Bridgnorth. 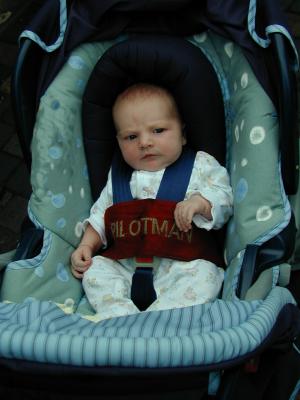 A new recruit to the department passes the test for wearing a Pilotman's armband but fails the oral exam. 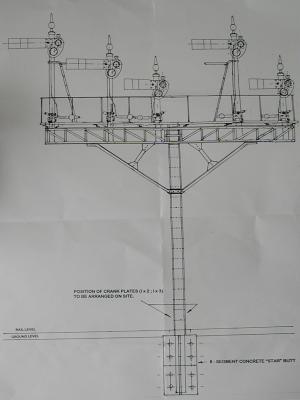 The drawing for the new platform starting signal at Kidderminster.