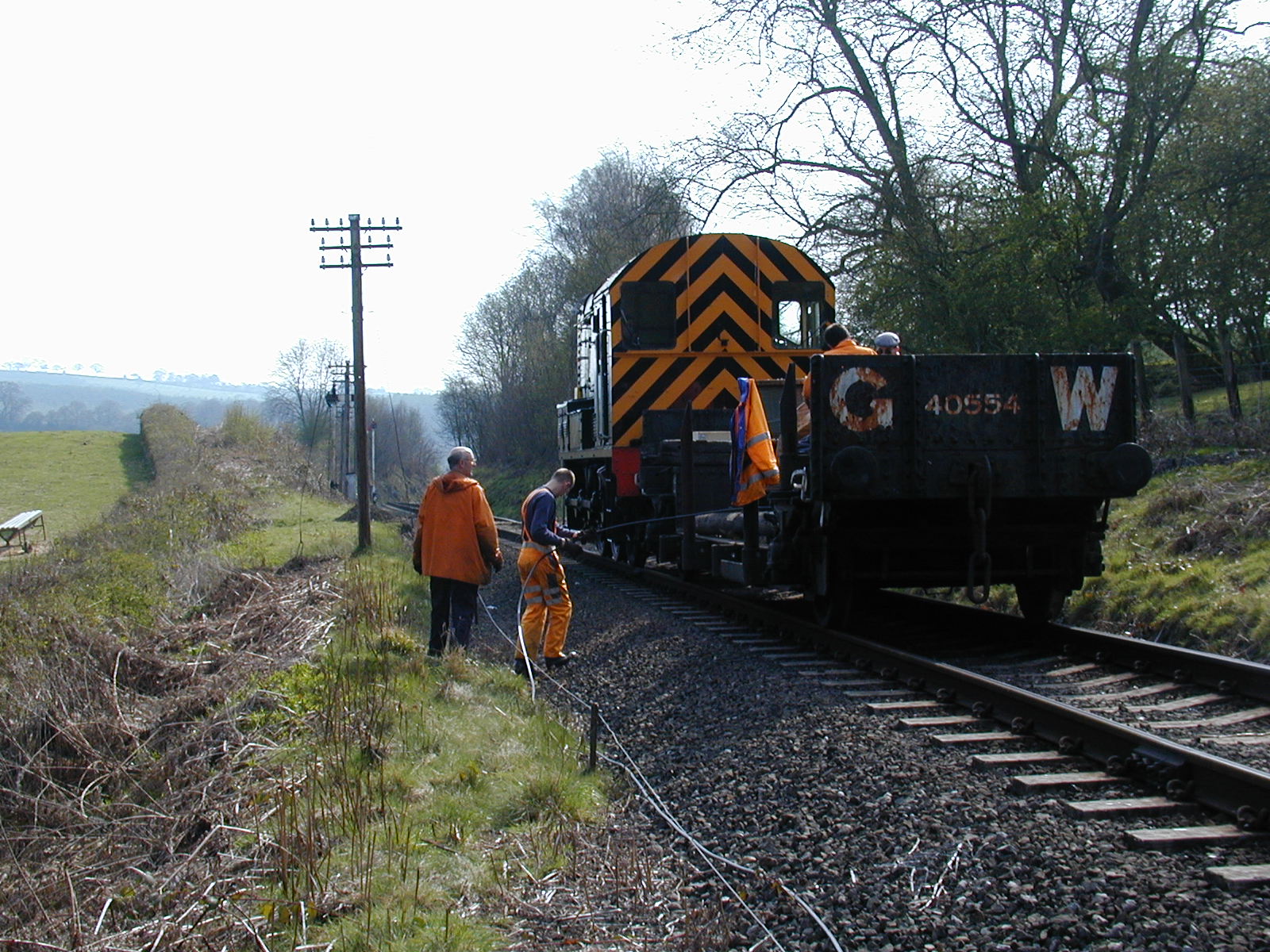 With two of us on the wagon turning the cable drum, Adrian Hassell and John Smith are paying out the cable as the train is drawn forwards.

Quite a long gap to fill with these notes - I'm writing these in January, a year since I penned the last set of notes - and the year 2003 has seen some changes. Long gone are the days when we had to arrange a special week in the year just so that we could all get signal box turns together. Now there are gaps to be filled in each month's signalmen's roster: as most of us in the Department are also signalmen, this has reduced the number of days we can give to 'S&T' (the installation, maintenance, testing and repair/renewal of the signalling equipment). As each year passes, the average age of those in the Department increases which provides some food for thought - however we welcome a new recruit to the Department to offset this trend, Matthew Morgan.

A lot of work has continued 'behind the scenes' as preparation for the major work of rewiring North box nears completion - a new cable termination frame, new shelves for signalling relays and trunking for the new wiring are pretty much complete. This work has been done with little effect on the working circuits. Design and drawings for the new circuits are currently being completed.

If I describe a few of the minor problems attended to during the year, this will give an idea of the variety of the work that the Department undertakes. A simple fault such as a blown fuse at North box (on 23 September) meant that the direction lever for the Down Main in South box remained locked in the reverse position, preventing trains from being signalled normally on the Down Main. Unfortunately, due to some junk (DMU with scaffolding being painted) being left on the Back Road, this left the signalman rather stuffed. However this was shifted and within a couple of days, the fault had been traced and rectified so that normal working could resume.

Lightening damage at Hampton Loade caused a token failure on 10 August - this was overcome by replacing a damaged fixed resistor the same day, leaving an indication fault on the power supply to the Up Distant (shewing standby power in use) which was repaired shortly afterwards - a redesigned power supply being fitted that should be more tolerant to lightening. We will take care to ensure that the designer is kept informed on this matter.

On 25 July the platform 2 run round crossover at Kidderminster (47 points) failed, requiring hand operation - the circuit controller (a device that provides control circuits with indication of the lever position and allows electric locks to be released at certain points in the lever travel) was replaced, utilising that originally fitted to lever 46, which currently remains 'spare'. Each circuit controller and lock slide is slightly different and this therefore required new quadrant plates to be machined so that the electric lock would not be 'pinched' with the lever resting in the 'B' (normal check) position (as this had caused several signalmen some difficulty). Fitting the new quadrant plates required the cam to be removed so it turned out to be quite a difficult and time consuming task.

During Easter 2003 a team of seven turned out to install signalling cable between the Up Distant and Up Home at Arley to allow the existing pole route to be taken out of service at a future date. This job had been prompted by a fault in the previous year affecting the token circuits and was done at one of the last opportunities for a weekday possession at Arley before the Summer running. Telecomms. circuits were already being carried in a separate cable strung on the poles. A special train had been prepared at Bewdley to convey the cable drums and the equipment to bury the cable. The team comprised the CS&TE, John Phillips, Dave Carr (08 driver), John Smith, Chris Hall, Adrian Hassell and Steve Growcott. The signalling cable was not much longer than the length required and so some care would be needed. Three cables were paid out in turn from the drum - a 12-core signalling cable, a telecomms cable and a 110V power cable and were laid in the cess - that sounds easy but the cables are heavy and even with the cable drum on jacks on a wagon being drawn conveniently along the route, there's a lot of hard graft! It was considerably easier to unload the empty drums than it had been to load the full ones.

With the cable laid out, the train returned to the Up Distant again and we started the process of ploughing the cables into the ballast. The signalling cable was positioned to allow just enough to be terminated in the location at the Up Distant and an initial pit dug. One member of the Department was used to anchor this end of the cable - with hindsight we should not have used a lightweight but the heaviest member of the Department was otherwise occupied. On arriving at the Up Home we found that the cable had sufficient spare to be terminated there. In fact, more than we expected...

During S&T week in July 2003, a new location cupboard was planted at the Up Home during exceptionally hot weather and was commissioned. This provides the necessary terminations for the new cable. At present the pole route remains live and the cable between the Up Home and Down Advanced Starting signals has been commissioned. The remainder of the cable could now be pressed into service urgently if needed and will be commissioned as and when resources allow.

The usual extremes of weather caused occasional difficulty with operation of points and signals, requiring minor adjustment. more noticeably, the south end points at Arley had dropped, causing the normal closed switch detection rod to foul on the concrete base for the detection. This resisted the efforts of the P-Way to lift the switch and crossing back to its proper position so we had to move part of the concrete base to allow the south end points to be normalised without difficulty. Naturally this fault arose during the intensive Christmas running at Arley. Major work is planned by the P-Way on these points during the 2004 Winter blockade - the crossing will be dug out, drainage improved and the track set to the correct level.

None of the equipment is getting any younger - the Down Main Homes at Arley were first erected (at Bewdley) pre 1930's - spares are not readily available and have to be made or bought in specially. The doll on the Down Main Home (no. 2 signal) is supposed to have a wooden top but it is more like compressed blotting paper. During the blockade, the doll on no. 2 signal is to be replaced by a new piece of timber - quite a bit job that will entail scaffolding and soak up our resources during late February and March.

On 6 December a report by the signalman that the Up Main to Kidderminster Home signal (no. 32) at Bewdley South was slow to return to Danger was investigated and the backstop casting found to be cracked. There just happened to be a spare on the bench in our shed which we wirebrushed and gave a coat of primer and fitted the next day. Meanwhile up trains used the Back Road (platform 3). On completion of the repair, we were surprised to see trains continuing to use the Back Road - the Operating Department must have felt that the Engineering Department should not think itself too much in demand - later we did see the Up Main back in use!

On 28 June the downrod on the Up Starting Signal at Bewdley South broke and a temporary repair was effected - this is the section signal to Kidderminster and so required ticket working to be put into effect to maintain safe working. Great Western signals are pushed to the 'off' position by a downrod - the spectacle casting is heavy enough to ensure that the arm returns to the 'Danger' position should the downrod break. A temporary repair was effected (several times) until a permanent repair could be completed.

During S&T week the lock bar by the box steps (no. 12 F.P.L.) was removed for a thorough clean and 'deluxe' maintenance after difficulty being reported by a signalman in May.

During September we turned out in force to clear the vegetation that springs up each year on the signal wire run to the Arley Up Distant (1000 yards) to anticipate the seasonal complaints from those signalmen who have not yet mastered the correct technique for pulling this signal (howls of protest from the unworthy). This is an unskilled job (the vegetation clearance that is) that some signalmen could take on themselves - if any are interested let us know next Summer and we'll organise it. There is an ideal opportunity for signalmen to make themselves useful during the five blockade weekends. Several signal arms are being replaced with newly procured and powder coated arms but this is beginning to show up some signal posts and dolls. If anyone would like to assist with painting of signals, the Department would be glad to give the necessary training and some support.

That pretty much sums up the sort of work we do - apart from the routine maintenance (oiling, greasing, cleaning and testing), splicing of the odd broken signal wire, and replacement of broken slings or track circuit bonds. A final reminder that this article and the photographs associated with it, as well as other S&T information, can be viewed in full colour on the unofficial S&T (signals) web site at http://www.svrsig.org/. 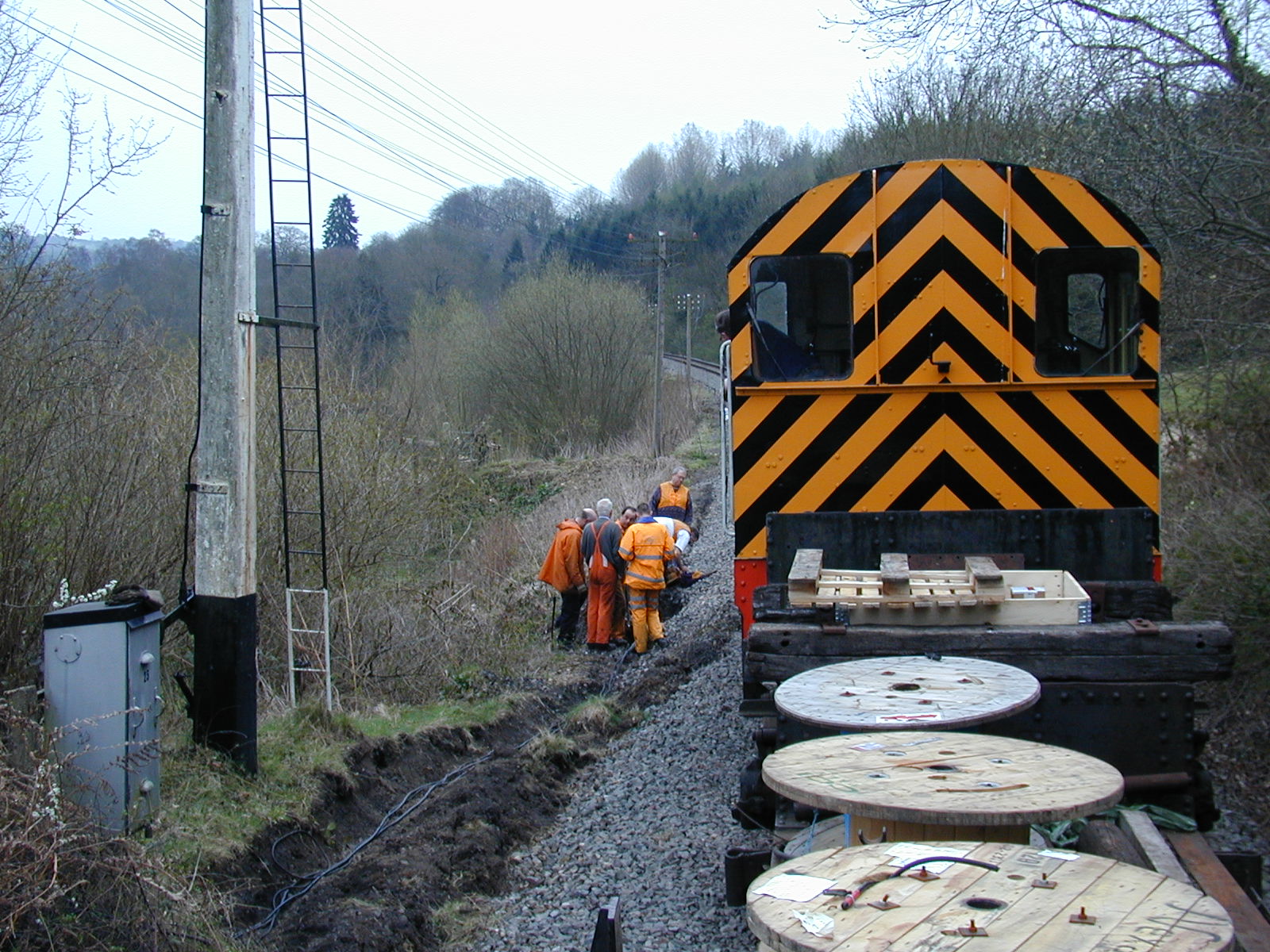 A quick conference before starting. 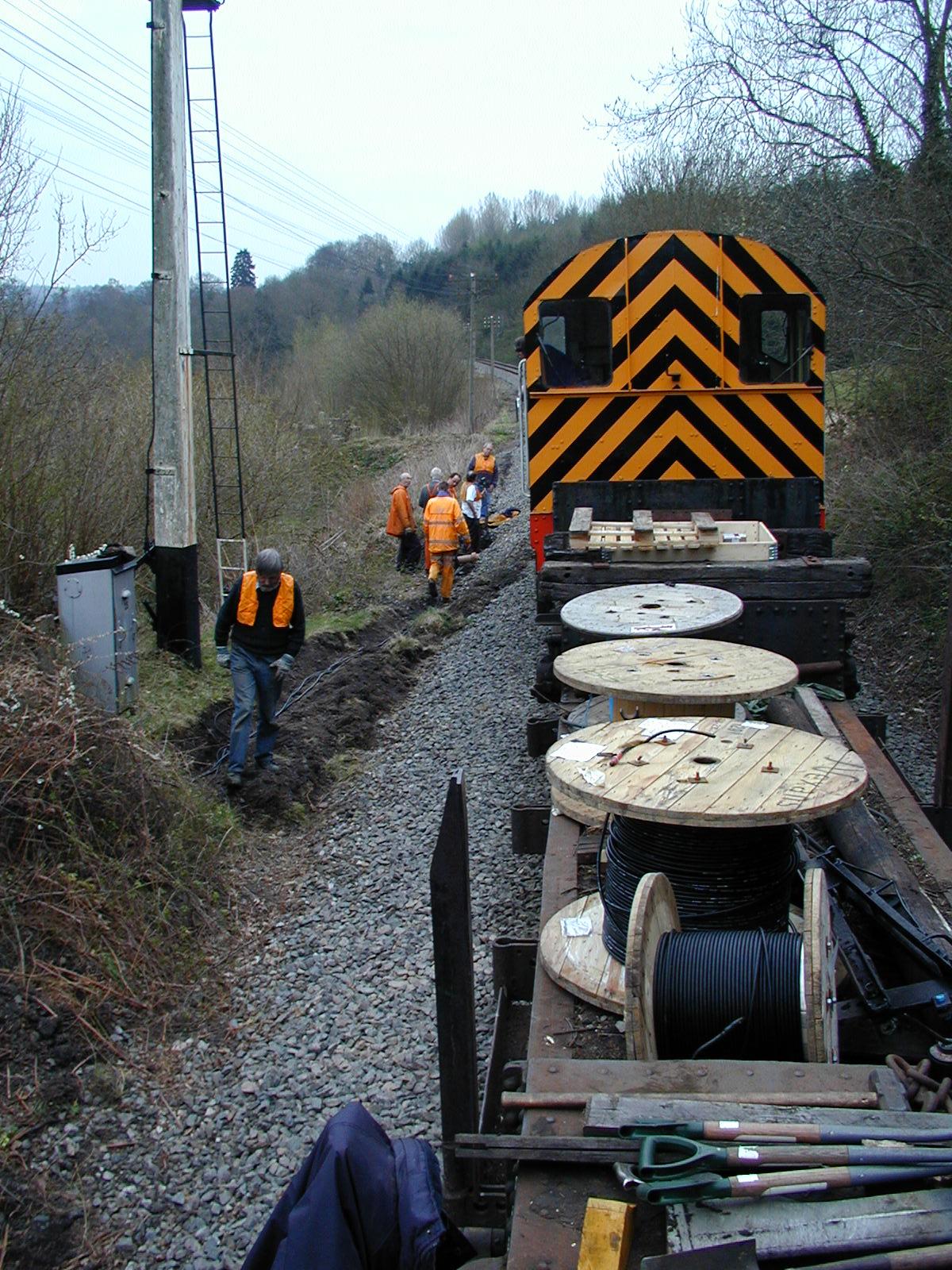 Ready to bury the cables. 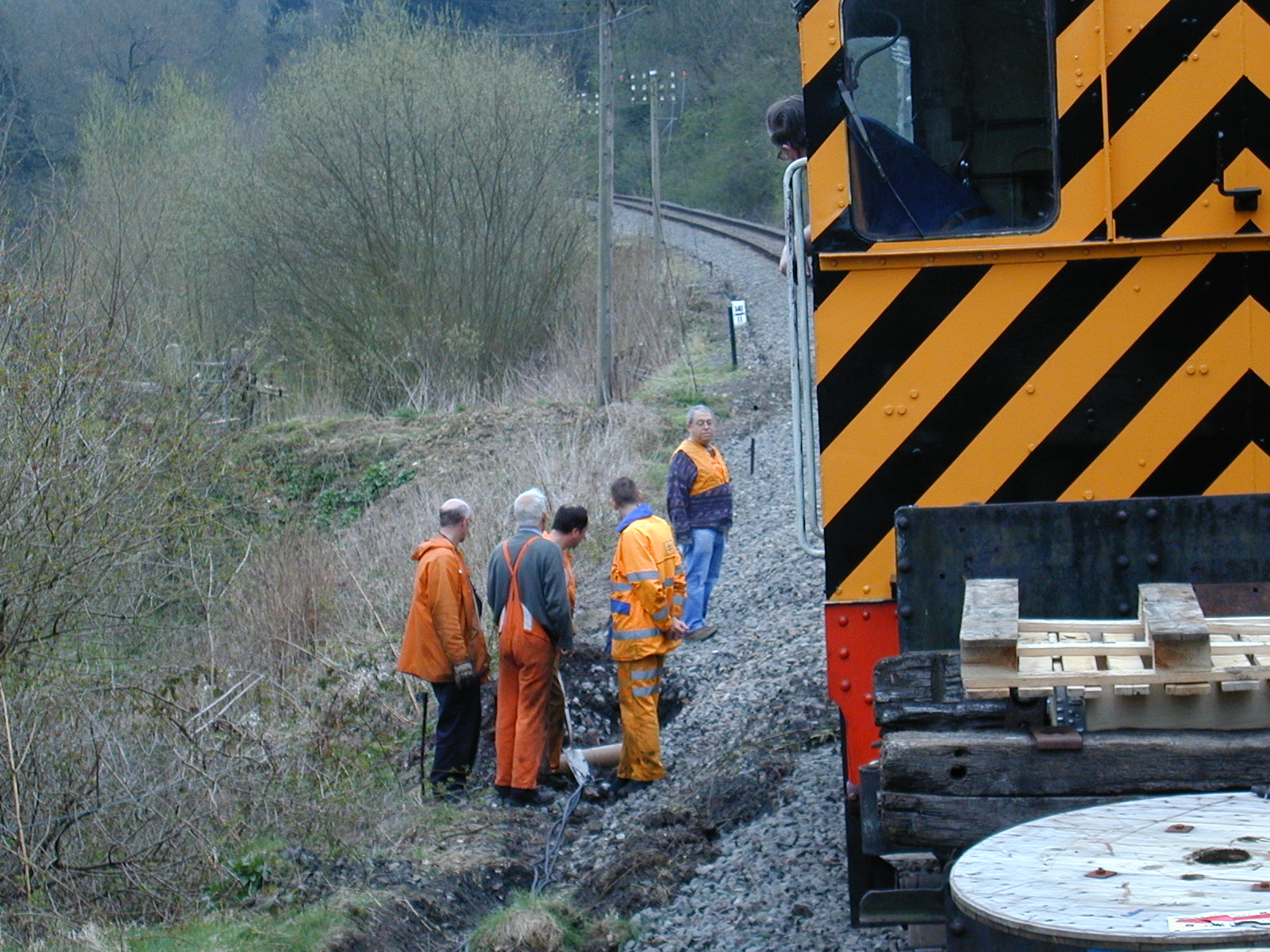