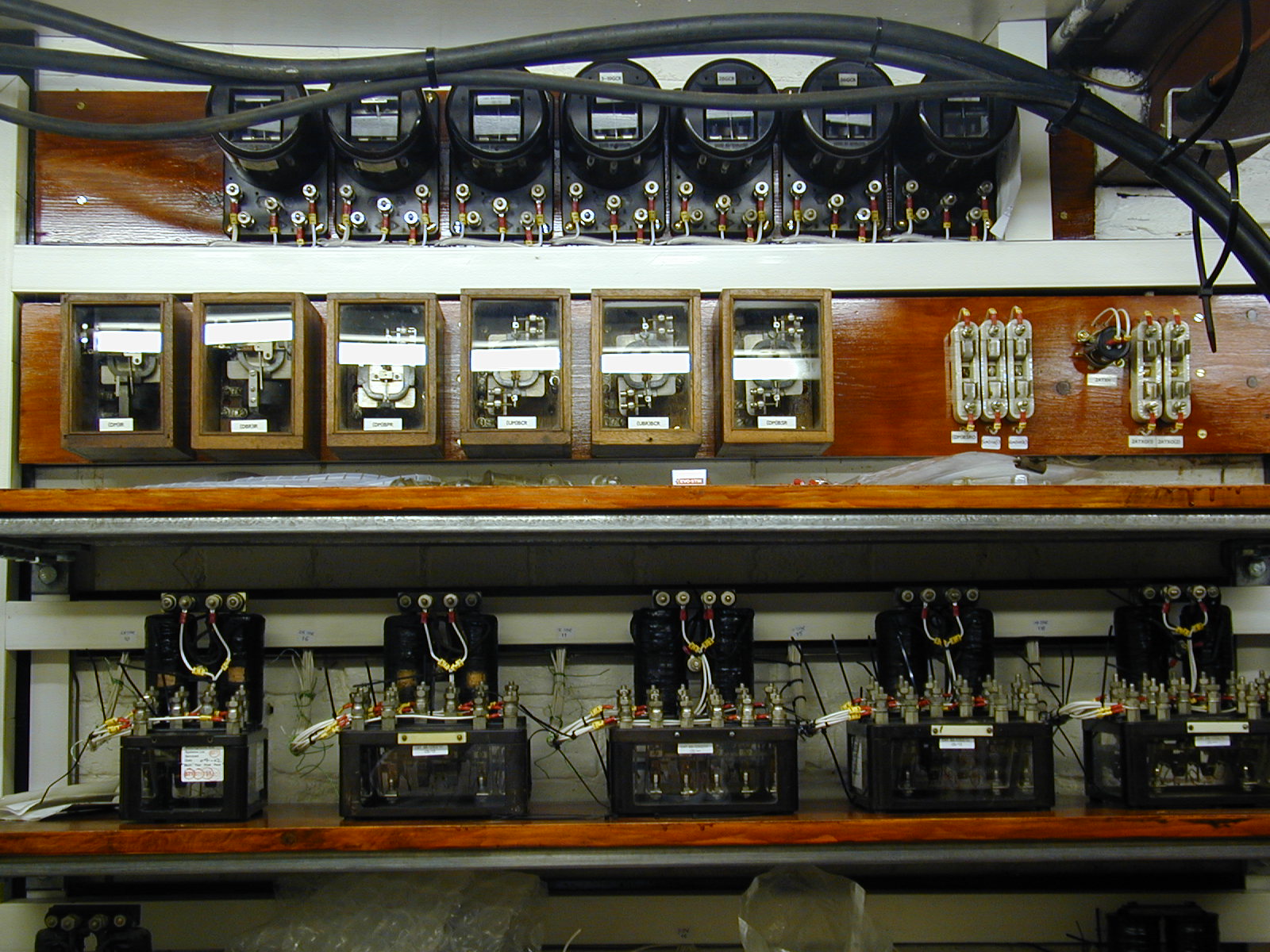 The first three shelves of relays near completion under North box - these are not yet in service and there are some signs of the 'work in progress' on the shelves below. [Photo Chris Hall]

I noticed that the last magazine (no. 147) had no 'Signalling Notes' so popular request has caused my conscience to prompt me to reach for my pen - six months has gone by and July is drawing to an end. Work 'behind the scenes' at North box has continued albeit somewhat stalled as the Department's resources are turned to Northwood Crossing where the work to replace the crossing surface did not leave our equipment undamaged. At Northwood many of the cables have had to be scrapped and some new equipment is required because bullhead rails have been replaced by flatbottom. New treadles could not be fitted until June when tamping work had been completed and some damaged cables needed to be dragged out of the ballast.

The finishing touches to the work at Northwood Crossing were completed the week after S&T week, Derek Jones, John Phillips and Richard Heap ran new track circuit and treadle cables, installed and tested within a day. The cables were terminated in the morning and after a brief stop for lunch, the testing was carried out amidst a thunderstorm which set the crossing off as the lightening struck! The crossing was commissioned in time to be operational for the last movements of the day. to be reused and reterminated. Hopefully by the time you read this, the crossing will be working again. One of the road traffic lights had been hit by a road railer (for which no-one has taken the credit) - another job which had to be done by us!

Although North box shows signs of the forthcoming box rewire there was much preparation beforehand 'behind the scenes' with a day spent by Derek Jones and John Phillips in Gloucester checking labels against wiring diagrams so that each pair of labels corresponded to each wire to be run in North box. This paid great dividends on the day of wire running - with assistance of Dave Carr and Matthew Morgan pretty much all of the wires were run in the day. North box remains festooned with wires, all carefully labelled and checked ready for termination and testing. Most of the relays required are now in position on the new racking, having been recently overhauled by Westinghouse.

During June the Hampton Loade signalman reported that the Down Home signal wouldn't operate. This was a scorching hot day but this would not explain the problem - the box had had to close at the end of the day, rather than switch out, so the defect needed swift attention. Nothing seemed out of place except for the detection rod extension piece, which was bent out of alignment explaining the difficulty. This was quickly adjusted to restore normal working. A reminder to signalmen of the correct procedure to be followed when points are heavy to work has been issued.

S&T week - our annual working week - fell as usual in mid-July and provided a focus for socialising (in the evening) as well as working (during the day). In the traditional way the week started with a Sunday Luncheon on the Venturer - twenty four places booked, filling one coach so that out decorous behaviour would not offend anyone other than fellow volunteers. The normal preparation having been made in the King and Castle, a delicious lunch was enjoyed. The lazier members dallied over the cheese at Bridgnorth, preferring to be shunted across to the bar, rather than walk across the footbridge, observing a rather abrupt stop as the signal was thrown back to Danger on a report of trespassers on the track being made to the Signalman. An alcoholic haze persists over the remainder of the day with some recollection of a whip round where the CS&TE was persuaded, amongst others, to contribute.

On the Monday a team worked at Kidderminster (Dave Carr, Matthew Morgan, John Phillips and Richard Heap) renewing track circuit tail cables in platform 1 - finally eliminating oil soaked and perished insulation. The author was able to observe this activity from the footplate of 5110 (obeying the instructions of the Signalling Inspectorate that signalmen should take the opportunity to see the job from the footplate from time to time) until brought to an abrupt halt at the Kidderminster Down Outer Advanced Starting Signal. There was no sign of the S&T personnel seen working earlier at this location - reportedly a team of two was carrying out maintenance of location cupboards between Kidderminster and Bewdley - but the Department's stock of fuses was mysteriously depleted and the remains of a brand new electronic multimeter were the only signs left behind... The train resumed its journey after being given written authorisation to pass the Signal at Danger while the fault was repaired.

Kevin Simpson wielded a paintbrush at Arley to good effect and Dave started working south from Bridgnorth on location maintenance. Location 14 is somewhat rural between Eadington and Hampton Loade and so one might expect no disturbance when unlocking and removing the location cupboard door - however a spirited attack by wasps took Dave by surprise and the padlock disappeared in the męlée. Naturally no sympathy was expressed in the evening over the wasp stings, just criticism over losing the lock - Dave retired hurt to the pub. The survey of location cupboards had proved that documentation chewed by mice and formed into a nest was difficult to read - replacements are in hand! Location 17 at Hampton Loade Up Home had gown a protective forest of vegetation that defeated efforts to reach it and station staff agreed to beat a path to its door for us with a strimmer (but have not yet fulfilled the promise). Later that day, a special train under the care of Driver Carr was arranged to visit Northwood to test the expertise of members of the Department (Chris Hall, John Taylor, Matthew Morgan, John Phillips and Richard Heap) in knot tying. The more successful knots succeeded in pulling buried armoured cables from the ballast so that they could be re-routed into troughing. The main signalling cable was diverted, cut and re-jointed by John Taylor and John Phillips - a task that nearly caused us to miss our evening meal but the Black Boy provided food at the stroke of nine which was much appreciated.

A new day dawned on Tuesday but many of us were to be found in signal boxes taking it easy pulling levers (Chris Hall, Dave Carr, Adrian Hassell, Steve Growcott and Dick Lewis). Richard Heap and another worked on the Distant Signals at Hampton Loade. Denvir Drury and John Taylor (undaunted by experiences the previous day) carried out a survey of location cupboards between Kidderminster and Bewdley checking the condition of equipment. The services of Driver Wright were pressed into service to deliver yet more fuses to Hoo Road Bridge on the way to Falling Sands Viaduct for a brief interlude of filming. Meanwhile more cables were being run out at Northwood by John Phillips.

Having decided upon the Mitre Oak for the evening drink, the services of a Kidderminster resident were utilised as navigator and, after a scenic tour taking in the Land Oak, we arrived. For reasons not wholly unconnected with blown fuses, a round was purchased as a penance by Denvir and a brief wake held for a deceased multimeter. Wednesday was a day when the CS&TE had absconded leaving us to our own devices. Dave Carr completed the joint in the signalling cable near Northwood Crossing by heat shrinking, testing having proved successful on the Tuesday morning. John and Denvir cut down the jungle growth around some of the location cupboards. Chris and Richard completed track circuit, F.P.L. and detection testing at Bridgnorth - despite the efforts of the signalman (who had clearly not had enough Weetabix that day). The platform bell at Bridgnorth was reported faulty and Richard convinced the Signalman that the bell should be sounded manually until the fault was rectified. John (S) shortened some signal wires at Kidderminster (on 16 and 23) and painted the driver's white light assembly for Northwood. Kevin Simpson and Matthew Morgan (the painting gang) managed to apply some more paint to the signals at Arley to good effect - Kevin prefers to work at ground level with Matthew working at heights so the paint falls mainly on Kevin. We met again at the Black Boy, but not quite so close to last orders this time!

By Thursday we had been joined by Geoff Midgley from his gardening leave at Bridgnorth, painting the edging stones around the flower beds (the reasons for which cannot yet be told) giving location cupboards a coat of black and silver. John Phillips, Chris Hall, Dave Carr and Richard Heap resumed work at Northwood Crossing, adjusted the new telecommunications system to remove bugs, reterminated the line to 310 (the phone in the location at Northwood) and reassembled the dial ring correctly, leaving Denvir to finish location maintenance at Kidderminster on the gantry and John Smith to continue painting at Bewdley until stocks of black paint were exhausted. A convivial evening at the Horn and Trumpet brought the day to a close.

By Friday we were coasting nicely along, John (P) and Dave (C) terminating cables in the morning at Northwood for the river side road lights, John (S) working North box, Chris and Richard, joined by Dave (C) in the afternoon, doing track circuit testing at North box, Steve Growcott having absconded again for another training turn at Bridgnorth and Denvir completing work on the gantry at Kidderminster. The Running Horse pub claimed our custom at Bewdley, the Pack Horse proving rather full.

On Saturday Adrian showed an allegiance to the Locomotive Department (Driver training), Richard was acting as Shunter at Kidderminster with Chris and Denvir completing work at Kidderminster. The name of a well known children's programme has been carefully hidden in this article, which those of the Baby Boomer generation may be able to find. One clue only is given: the previous article also had the same phrase buried within it. Members of the S&T Department (who may recognise the phrase as a term sometimes applied to certain signalmen) may not participate in this competition! All in all S&T week proved to be a very enjoyable week, with some hard graft but a lot of fun as well. Members of the Department also participate in other roles - shunters, duty officers, firemen, drivers, signalmen, guards, inspectors and roster clerks. If you want to come and work as a volunteer you will be most welcome!

A final reminder that this article and the photographs associated with it, as well as other S&T information, can be viewed in full colour on the unofficial S&T (signals) web site at http://www.svrsig.org.uk/ (or look for 'svrsig' on google).