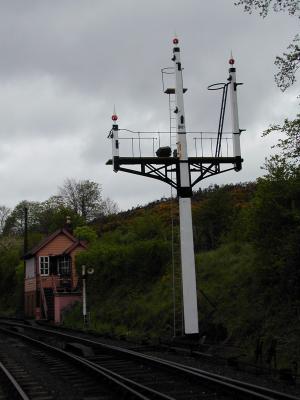 The newly erected signal has just been planted on 2nd May 2006.

We seem to have been quite busy over the last few months - the biggest job being renewal of the main post of the Bewdley South Inner Homes bracket. As I start writing these notes it is in the car park ready to be lifted into position after a great deal of recent work which I'll outline below. I'd also like to welcome some new arrivals to the Department: Geoff Finch has joined us as a part time member of staff after a career of some 48 years, latterly in the Worcester District, with the "Big Railway". Graham Rowberry, Ray Ellis and Andy Williams have joined us as volunteers.

By now you should be able to see the refurbished Inner Homes bracket outside Bewdley South in all its glory (despite what was said in some less well-informed journals). This job has soaked up most of the volunteer effort over the last six months and it is very satisfying to see the work coming to fruition. The story really starts in July 2005: just as we were about to replace the refurbished five foot arms on this signal, at the end of S&T week in July 2005, to bring working distants into use, an examination of the main post of this signal showed that some rotten wood, which had been repaired by 'grandfather' timbers surrounding the post, whilst still in the ownership of British Rail, had deteriorated to the extent that the main post would have to be replaced.

As you might imagine this would be a major piece of work - finding a supplier who could provide a piece of timber some 37' long tapering from about 12½" square to 6" square was the first task. Getting the existing signal out of the ground and laying it down in the car park over the Winter would allow us to strip off the component parts. The steelwork had suffered some corrosion since the 1930's when it was installed and would have to be taken apart, some rivets removed, the wasted parts removed and replaced and then re-rivetted together. The timber decking had been replaced in 1995 and would by now need renewal again. There would be at least six month's work in the car park at Bewdley - during which trains would be running, so we needed to consider what provision we would make in absence of this signal. The first task therefore was to make another signal!

It was extremely tempting to install a three aspect colour-light signal with a feather as the temporary signal - in fact this would have proved difficult as the detection was wholly mechanical so we decided to install a two arm semaphore. We got together the necessary castings for this signal, shot blasted and painted, as well as two pristine signal arms and spectacle castings as well as a tubular steel post. By 4 November 2005 the new temporary signal had been dug in and connected and, after a session of detailed photography by Jason Houlders (so that we could avoid any arguments about which bit went where when we came to put it together again), the fittings were removed from the original signal and the Permanent Way Department were asked to bring up the crane from Bridgnorth and get the old post out. 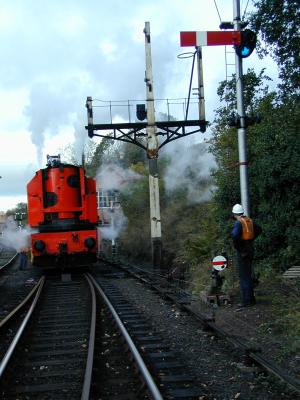 The temporary signal is in place on 4 November 2005 and the Bridgnorth Loco Crane has arrived to take down the original signal.

Some organisation was required to clear vehicles from the Down Yard at Bewdley to give access and it was a relatively straightforward operation to lift the old signal and transport it on a wagon. 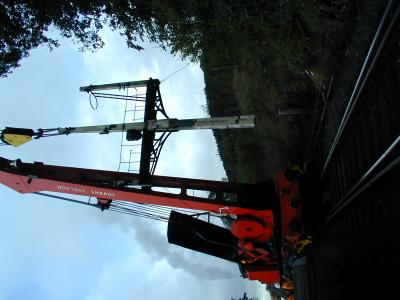 After a quick stroke from a chain saw to remove the remnant of sound wood, the bracket is lifted clear. The stump was removed just afterwards.

With the permission of the Bewdley station staff, we comandeered a section of the car park and laid out the remains of the bracket signal so that we could strip it down and assess which parts would have to be scrapped and which were sound. Where water had accumulated, the bracket steelwork had suffered significant oxide jacking and thinning - some sections of angle-iron, plates and straps would need to be replaced by ½" plate or 2"x½" angle and a short section of the main spar built up by a weld repair. After careful measurement - at top and bottom, as well as where the steel bracketwork fitted to the post - we specified the dimensions of the replacement main post. This was later delivered to Kidderminster and put under covered accommodation at Kidderminster for painting.

After careful measurement of the new post to establish the width at the top and bottom of the bracket steelwork, the new vertical angle iron supports could be aligned and drilled so as to minimise the depth of the rebate that would need to be cut in the main post to ensure an accurate fit. After much cutting and drilling the bracket work was provided in kit form to the Wagon Department for rivetting together. Once fully painted the bracket steelwork was placed on trestles above the wooden post and the depth of the rebate carefully measured to ensure that the steelwork was a nice tight fit and also that the bracket would be aligned at right angles to the post (using some simple geometry). Only a fraction of an inch had to be shaved off and this was done using a power planer until the steelwork dropped neatly into place.

The post was then turned over and the task repeated for the other half of the bracket steelwork. Many holes were then needed for the through bolts and numerous slots and holes for the other castings on the main post. New platform timbers and refurbished and painted handrails were then fitted making the signal look fairly complete. Naturally it was much easier to put everything together in the car park than some twenty feet in the air.

Removal of the old signal had been facilitated by cutting the post at the base where it was rotten but the new signal would have to be lifted clear of the hole. The Bridgnorth crane would not be able to lift from the top of the new signal and get the necessary height and so a lifting attachment was manufactured from 3/8" plate which could be attached by means of the four 5/8" bolt holes provided to attach the distant signal machine. Another job to manufacture, with some assistance from Bridgnorth for welding and assembly. 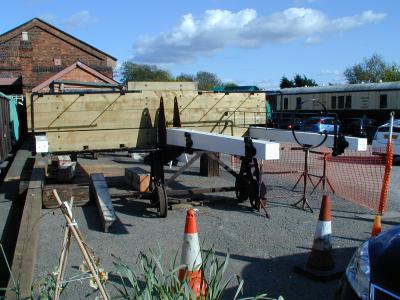 After five months of work, the refurbished signal lies in the car park at Bewdley on trestles, with most of the fittings newly painted and assembled.

Finally the signal was ready in the car park with two weeks to spare before the planned lift to erect the signal. The finials had been attached to the wooden top of the post and dolls, as had the spindle castings and lamp brackets. This had been five months of hard work and we were keen to see the signal planted.

On 2 May 2006 the Bridgnorth crane made another visit and lifted the signal onto a wagon so that it could be transported to South box and laid down on the running line ready for the final lift. The hole had been dug out to clear any debris and excavated to the right depth and lined front and back with boards to allow the signal post to slide into position.

The lift went according to plan and the signal was planted on 2 May. This leaves us to reconnect the electrics - six signal lamps, one arm repeater and a signal machine - and the mechanical work - several cranks and downrods and two balance weight castings before the job is completed. Something to celebrate on our annual Venturer lunchtime meal on 30 July. Then there is just the matter of removing the temporary signal as and when.

We acknowledge the assistance from other Departments of the Railway in this major piece of work - the PWay Dept assisted with moving materials to site and with crane work; Bridgnorth assisted with the Bridgnorth crane and welding; Bewdley Loco. assisted with hole digging and general labouring; Bewdley Wagon Dept assisted with rivetting, loan of trestles, use of the goods shed and shunting; Pete Simpson with machining; Mike Heintzman for his help and advice; Bewdley C+W with wood-working facilities; LNER coach fund with use of the tool shed and assistance with woodwork, Kidderminstr Carraige Shed for covered accommodation; Jason Houlders with detailed photography; Bewdley Station staff with use of part of the car park and Martin Wood with waterproofing. 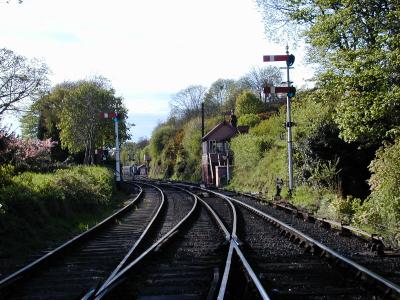 The temporary signal on 2 May 2006 just before the visit by the crane. 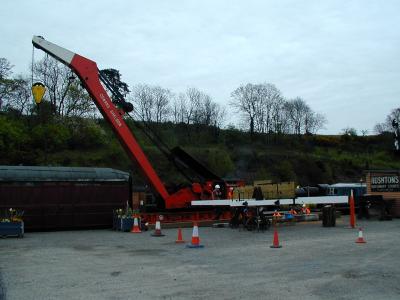 The crane has arrived and the outriggers extended ready for lifting. The yard has been cleared of wagons and signal is ready to be moved. 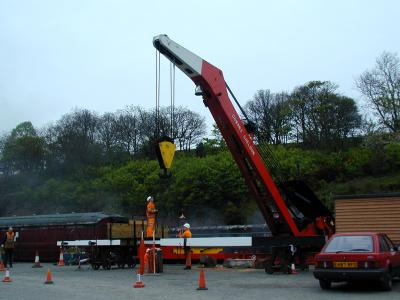 Attaching some slings so that the signal can be placed on a wagon. 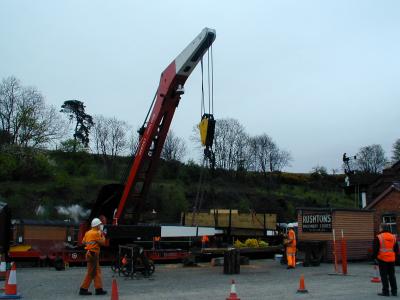 Taking the strain so that the slings can be carefully adjusted. 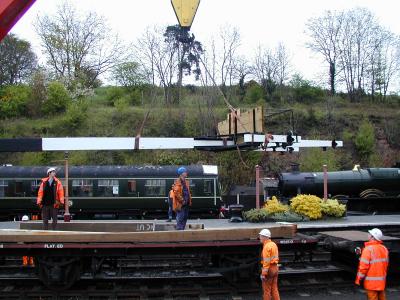 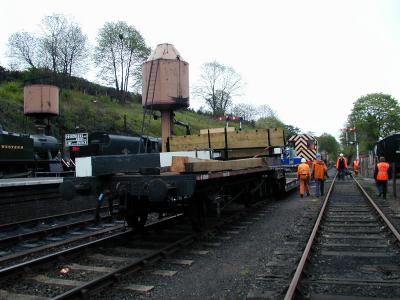 On the way to South box along the Down Main .. 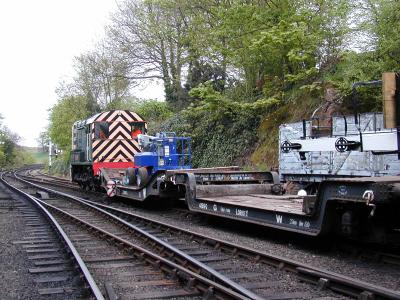 ... onto the Stourport line to wait for the crane. 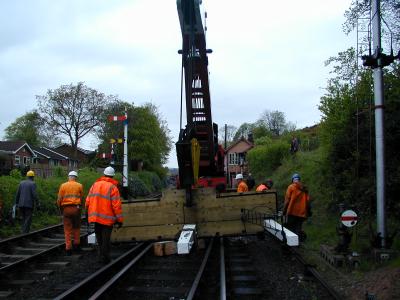 The crane is in position on the main line and has lifted the bracket signal from the wagon and onto the running line so that the hook can be attached. 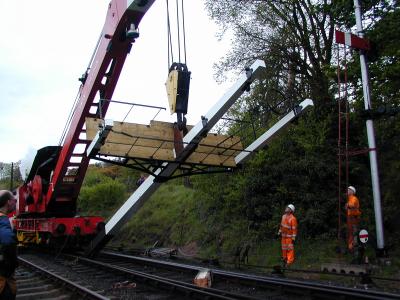 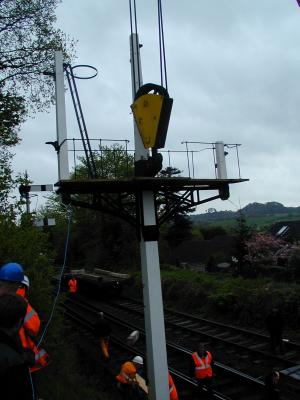 The bracket signal hangs from the crane, with the base of the post resting in the hole. 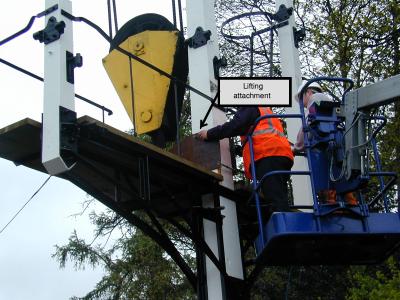 With the post firmly packed into the ground, the lifting attachment is removed to free the hook. 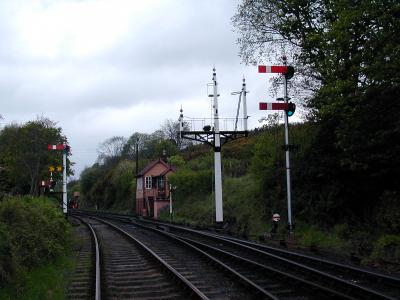 Temporary signal and refurbished bracket after the day's work is complete.

A close-up of the refurbished signal. 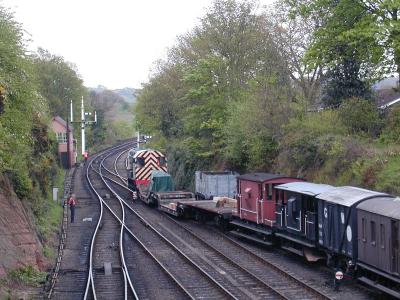 The wagons are shunted back into the Down Yard and we can go home.